The world’s oceans are filling up with more and more plastic waste, slowly breaking down into smaller fragments known as ‘microplastics’. Tiny particles from items such as car tires and microbeads in personal hygiene products also end up in the ocean.

One billion pieces of microplastics every hour

Plastic waste is very persistent. Large plastic objects eventually break down into microplastics after enduring UV-radiation, wind and waves. This is believed to be the main source of microplastics in marine environments. We define microplastics as plastic fragments under five millimetres.

Examples include car tyres, painted surfaces and synthetic textiles.These smaller plastic particles end up in the sea after passing through wastewater treatment plants. Every hour, it is estimated that over one billion microplastic fragments enter Norway’s largest wastewater facility. Even though the most advanced wastewater facilities retain approximately 87 to 97 percent of small plastic particles, many million pass through every hour.

Only in recent years has the awareness of the problems microplastics pose increased, despite the fact that industrial plastic production began over 50 years ago. One explanation for this is that plastic is so persistent it takes a very long time for larger pieces to break down into microplastics.

Plastic waste can spread pollutants that pose a threat to the environment and human health. This is due to two things: firstly, plastic consists of such pollutants, and secondly, because other environmental toxins latch onto microplastics. As a result, because microplastics have been found in every ocean on the planet, we assume that hazardous pollutants could be spread to remote coastal areas.

In a study of European marine environments, marine litter was found in one of the most remote parts of the Atlantic Ocean at 4,500 metres below the surface. These results make it clear that we need to know more about the ways microplastics travel, in order to understand how many environmental toxins they could spread.

Microplastics and plastic waste are to beis found on the water sea surface, water column, on the seabed, frozen into the Arctic ice, as well as on the seashore. Nevertheless, scientists believe that given the quantities of plastic produced, we should find even more plastic waste in the environment than has been the case so far. Therefore, there are large quantities of plastics that cannot be accounted for. We need to find out why if we are to understand how plastic affects marine environments.

Different theories have been launched to explain why so much plastic has vanished:

Removing plastic waste from the ocean is extremely difficult and expensive. Additionally, when the waste has broken into microplastics it is practically impossible to remove.

Microplastics in the food chain

Animals can easily mistake fragments of plastic for food. Once ingested, these can cause internal injuries, digestive problems and a false sensation of satiation.

As large pieces of plastic break down into smaller fragments, there are more surfaces for the environmental toxins to latch onto. The concentration of environmental pollutants therefore increases manifold, where microplastics are an important source for toxins in marine organisms. The smaller the fragments are, the larger the potential for uptake of pollutants in the animals that ingest them.

Continuing up the food chain

The chemicals in plastic itself and the attached environmental toxins may be released when plastics are consumed. A few studies conclude that plastics continue up the food chain. When a fish eats zooplankton that has consumed microplastics, the plastic has later been found in the fish itself. This is why we need to learn more about the impacts of microplastics in marine ecosystems.

A study commissioned by the Norwegian Environment Agency has provided some preliminary estimates of the quantities of microplastics ending up in marine environments, and documents the most important land-based sources in Norway. The study estimates that approximately 8,000 tons of microplastics are produced on land in Norway, where roughly half of this ends up in the sea.

Of the microplastics ending up at sea, 2,250 tons stem from particles worn and torn off car tyres while driving. The second largest source is painting and maintenance of ships and leisure boats. This contributes 650 tons of microplastics into the sea. Painting and maintenance of buildings, constructions and roads are also an important source – 310 tons end up at sea. 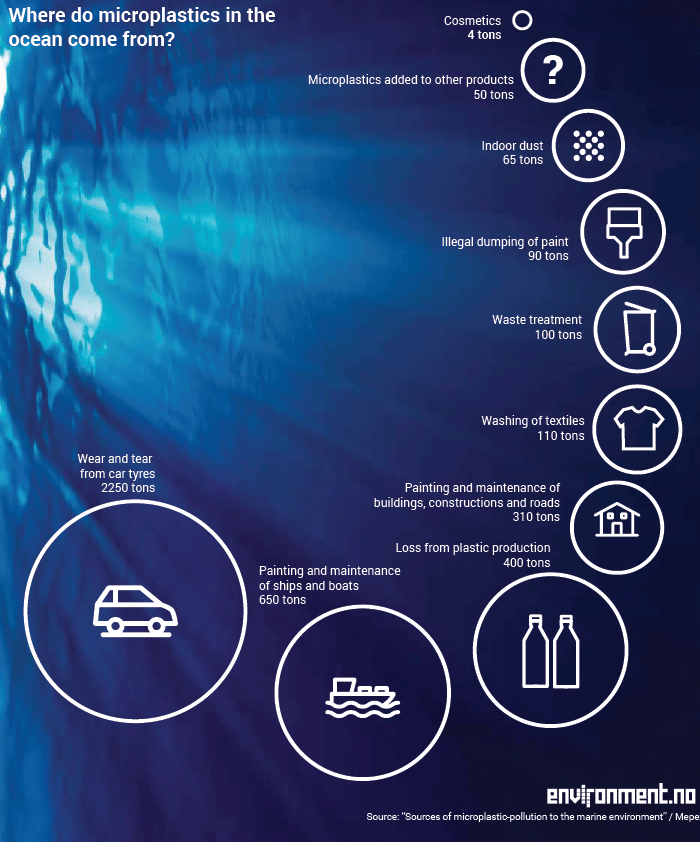 In recent years, the use of microplastics in cosmetics has attracted a great deal of attention. Manufacturers add plastic microbeads to toothpaste, facial and body scrubs to give a polishing effect for the skin. The problem is that these microbeads are so small that they are washed down the drain and out to sea with the wastewater.

The same happens to plastic fibres in synthetic clothes when they are laundered in machines. Additionally, there are other less known sources contributing to the microplastic pollution.

In 2015 the Norwegian Environment Agency are analysing which measures to implement when tackling problems of marine litter and microplastics. International cooperation will be essential when tackling the problems microplastics cause. Oceanic currents spread microplastics, which is why the very nature of this problem is a worldwide concern.

OSPAR, the convention that regulates the cooperation of protecting marine environments in the North-East Atlantic, recently adopted an action plan against marine litter – an important source of microplastics.

Even though cosmetics and personal hygiene products are not the largest source of microplastics, it is an area where consumers can make a real difference. Last year the Swan label, the official Nordic ecolabel, announced that manufacturers had to document that their personal hygiene products do not contain microplastics in order to be ecolabelled. For Nordic consumers, buying Swan-labelled toothpaste, face and body scrubs is an easy way to avoid harmful microplastic pollution of marine environments.