The lynx is widely distributed in northern Europe, but a substantial proportion of the population lives in Norway, Sweden and northwestern Finland. All three countries are therefore independently responsible for lynx management within their borders, and also have a joint responsibility for management in the region as a whole, since lynxes range widely across national borders.

In the mid-19th century, the lynx was fairly widely distributed in Norway, except along the west coast and in northern parts of the country. Its distribution probably became more restricted during the 1800s, and by 1920–30 only relict populations remained. This was also the case in Sweden.

In the 1950s and 1960s lynx numbers rose again. The species expanded into parts of its former range, and also expanded its range northwards in both Sweden and Norway, so that there are now lynxes in areas where they were not previously found.

Today, there is a permanent population of lynx throughout Norway, except in the counties of Western Norway, where it occurs more sporadically. Lynxes probably did not breed in Finnmark until 1980.

The map below shows where lynx family groups were registered in Norway in 2017. Each circle represents one family group. 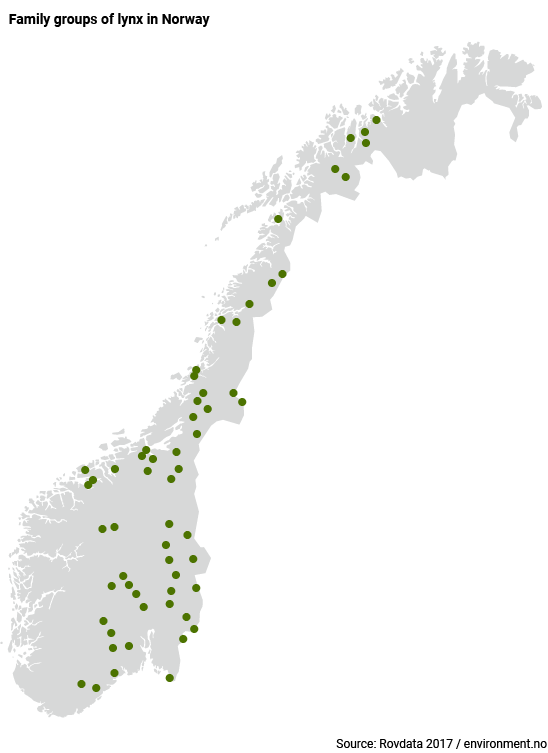 In 2017, 55,5 litters of lynx were registered in Norway before the start of the hunting season, corresponding to about 330 animals. Thus, the annual target of 65 litters was not reached in 2017.

By the 1930s, year-round hunting and the payment of bounties had almost completely eradicated the lynx from Norway. Today, the population is regulated by hunting under the normal rules of the Wildlife Act.

The government bounty scheme for lynx was ended in 1980, and in 1992 the species was protected in the southern half of Norway, until hunting was reintroduced (regulated by quotas) in 1994.

International agreements that apply to the lynx

Norway’s current policy is intended to ensure that the lynx population is viable and that active and all-round use of resources in uncultivated areas can be maintained, including grazing by livestock and domestic reindeer.

Measures to reduce losses of livestock and domestic reindeer are important in preventing and reducing lynx–human conflicts. Hunting quotas and culling are both intended as measures to reduce conflict.

The map shows designated management areas for lynx. You can zoom in or out to explore further.

The lynx population is monitored as part of the national monitoring programme for large carnivores.

Family groups (which consist of a mother and her yearling cubs) are registered each year by snow-tracking. This is usually done by local observers, who report to the Norwegian Nature Inspectorate. In addition, lynx tracks are censused along fixed line transects in some parts of Norway. The Norwegian Association of Hunters and Anglers is responsible for these observations.