Around 150 years ago, there were 4000–5000 brown bears in Scandinavia, roughly 3000 of them in Norway. Bears were ruthlessly hunted in both Norway and Sweden in the early 20th century, and almost exterminated. Today, the stronghold of bears in Norway is along the border with Sweden, Finland and Russia.

Norway’s national target is for 13 bear litters to be born each year in Norway. It is estimated that in 2017, only seven litters were born.

It is difficult to register bear cubs in the field, because females with cubs do not leave the winter den until late in spring, often after the spring thaw. This means that they cannot be registered by tracking them in the snow. In addition, it is often difficult to determine whether cubs were born in the current year or the year before, since they may not be very different in size. DNA analysis of bear scat and hair samples is therefore used to estimate the number of litters.

It has proved to be difficult to obtain reliable figures for the number of bears in Norway. They spend most of the winter in hibernation, so that tracking them in the snow is not a suitable way of registering numbers.

In 2006, collection of bear scat for DNA analysis was started in a project involving moose hunters and the Norwegian Nature Inspectorate. From 2009, scat and hair samples have been collected every year from all parts of Norway.

In 2017, DNA analysis showed that there were at least 125 bears in Norway, 55 females and 70 males. These are minimum figures, since we cannot assume that every single animal was registered. However, systematic sampling repeated over several years gives a very good picture of the Norwegian bear population.

Read more about the data Share graf Jpeg
Png
Pdf
SVG Download graf as Print
This graph is created with open data from miljøstatus
Create you own graph on http://miljostatus.no/finn-tallene
Update
Yearly
Data producer
Rovdata
Distributor
State of the Environment Norway
Contact
miljostatus@miljodir.no
Name of dataset
Species on land
Read more about the data
http://rovdata.no/Brunbjørn/Bestandsstatus.aspx
Read more on the subject
http://www.environment.no/goals/1.-biodiversity/target-1.2/status-of-specific-threatened-species/six-bear-litters/
Number of brownbears in Norway 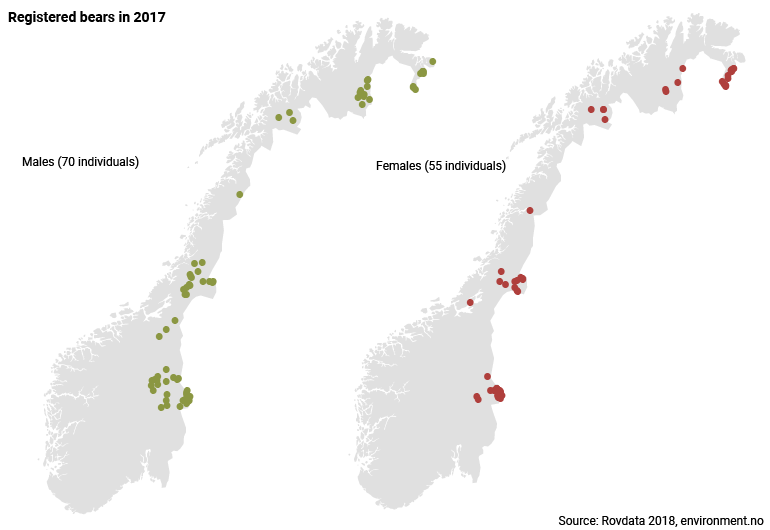 The bears living in Norway today are considered to belong to two different populations. Bears in Finnmark belong to the Norwegian-Finnish-Russian population, while those in other parts of the country belong to a joint Scandinavian population.

Most bears are found in a zone along the border with Sweden, Finland and Russia, but young  male bears roam very widely and may turn up almost anywhere in mainland Norway.

Between 1850 and 1860, 200–300 bears were shot every year in Norway. They were relentlessly hunted in both Norway and Sweden, and were almost extinct in most of the region by the early part of the 20th century. A bounty system was maintained in Norway until 1932.

Today, the population is regulated by culling by licensed hunters. This is done to reduce livestock damage. When a cull is authorised, the bear quota is set at a level designed to maintain a viable population. The authorities may also authorise culling of a specific problem bear to prevent damage to livestock or domestic reindeer.

In 1932, Norway introduced legal protection for hibernating bears, and in 1973, this was extended to give year-round protection.

International agreements that apply to the brown bear

The Bern Convention on the Conservation of European Wildlife and Natural Habitats applies to the brown bear. The species is included in Appendix II, which lists strictly protected animal species. It is also included in Appendix II of the Convention on International Trade in Endangered Species of Wild Fauna and Flora (CITES). This Appendix lists species in which trade may be permitted but must be strictly regulated.

Norway’s policy is to ensure that bear populations are viable and that active and all-round use of resources in uncultivated areas can be maintained, including grazing by livestock and domestic reindeer.

This means that in some areas, we are trying to maintain a bear population and at the same time safeguard livestock and/or domestic reindeer. Measures to prevent or reduce bear-human conflicts are very important. These may include suitable fencing, bringing livestock in from rough grazing earlier than normal, using dogs to guard livestock, or keeping livestock in enclosures at night. In addition, problem bears can be culled in acute situations.

The map shows designated management areas for brown bear in Norway. You can zoom in or out to explore further.

In areas where it has been decided that breeding bears are unwanted, culling is the most important means of regulating the population. In these cases, culling of a quota of bears is permitted.

In addition, it is easier to obtain permission to cull problem bears that take sheep or domestic reindeer in these areas than in the designated management areas for bears.

DNA analysis of the samples makes it possible to determine the sex and identity of the bear in each case. This information, together with knowledge of the size of the home range normally used by female bears and the age structure of the bear population, is used to estimate the number of litters born in Norway each year.