A great deal has been done to reduce sulphur emissions in Norway and the rest of Europe, and pollution has been substantially reduced as a result. Nevertheless, much of the southern half of Norway is still suffering from damage caused by acid rain.

Southern half of Norway still suffering from damage

Deposition of sulfur and nitrogen can lead to acidification of water and soil. In Norway acidification, results in reduced water quality in lakes and rivers in the southern half of of the country, and especially in the southernmost counties. Over the years many fish stocks have been depleted or wiped out, and other aquatic animals and plants are also affected. 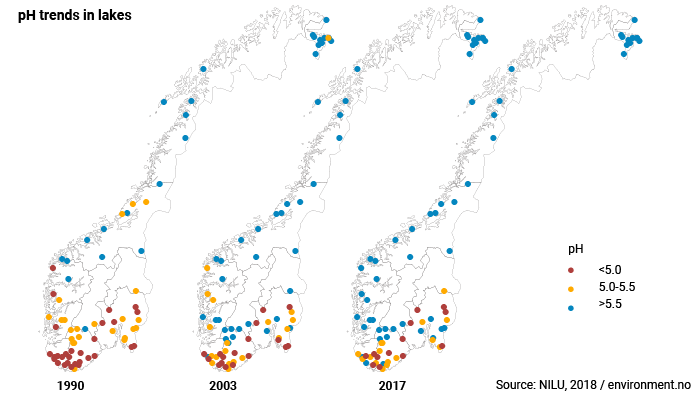 Deposition of sulphur causes acidification in Norway, and sulphur deposition is highest in the most sensitive areas in the south. As sulphur emissions are being reduced more rapidly than nitrogen emissions, the relative importance of nitrogen as a source of pollution is increasing.

Nitrogen also has other effects

Nitrogen has more complex ecological effects than sulphur, because it can also act as a fertiliser and cause eutrophication. Most nitrogen is absorbed by plants or the soil, but the remainder ends up in fjords and coastal waters, where it can fuel eutrophication and excessive algal growth.

Critical loads low in the southern half of Norway

Critical loads are used to define the amount of pollution different ecosystems can absorb without damage to the natural environment. In Norway, freshwater ecosystems are particularly sensitive to acidification. Critical loads for freshwater are based on the effects on trout. They are particularly low in the southern half of the country, mainly because soils are thin and the bedrock consists of acidic rocks such as gneiss and granite.

Acid rain has led to a significant reduction of biological diversity in rivers and lakes in Norway. The salmon stocks in southern Norway and south western Norway were hit hard by acidification. At least 25 salmon stocks were lost and at least another 20 were negatively affected. As a result of liming, salmon stocks in 12 watercourses are now secured, and salmon stocks have been re-established in ten other rivers where the salmon was extinct.

Little or no damage to Norwegian forests

In the 1980s, acid rain resulted in widespread damage to forests in the border areas between Poland and the former East Germany and Czechoslovakia. There was serious concern about similar damage in Norway, and in 1984 the Norwegian Monitoring Programme for Forest Damage was started.

On the whole, Norwegian forests appear to have tolerated sulphur and nitrogen deposition without serious effects. They showed a decrease in vitality (measured as crown density) during the 1990s, but since then conditions have improved. In the last few years, the health of Norwegian forests has remained stable.

In addition to its effects on ecosystems, acid rain has serious consequences for society as a whole. One example is that loss of fishing opportunities can lead to economic losses for businesses in the affected areas. About 90–100 million NOK has been spent annually on liming of rivers and lakes in recent years. Acidification may also damage buildings, sculptures, rock art and other parts of our cultural heritage.

Trends determined by energy use

Acid rain is mainly caused by combustion of fossil fuels. More than 90 per cent of the sulphur and 80 per cent of the nitrogen deposited in Norway originates in other European countries. The UK, Germany, Poland and the North Sea are among the most important sources. This means that the amount of acid rain falling on Norway is to a large extent determined by developments elsewhere in Europe.

The European emissions have been greatly reduced over the last 20–30 years. This is largely due to technical improvements in industrial processes, and a transition from coal to fuels with less sulphur. There has not been a corresponding reduction in the emissions of nitrogen, because these emissions are highly influenced by the use of transport.

Industry and transport the main sources

Inputs of sulphur and nitrogen to Norway have declined as emissions in Europe have been reduced. However, there has been a much smaller overall reduction for nitrogen (sum of oxidised and reduced nitrogen) than for sulphur. There are several reasons for this:

Total deposition of sulphur in Norway was reduced from about 200,000 tonnes in 1980 to 27,000 tonnes in 2013, a reduction of more than 85 per cent. In 2014, however, the deposition rose dramatically, and was 3.5 times as high as the previous year. This was due primarily to large sulphur emissions from the volcano Bardarbunga in Iceland. It is estimated that the emission from the volcano was more than three times as high as the annual man-made emissions from all EU countries. Heavy rainfall in southern Norway in 2014 may also have contributed to increased deposition.

In Norway, the main sources of sulphur dioxide emissions are metal production, stationary combustion and other industrial processes. Norwegian emissions have been greatly reduced, from about 150,000 tonnes a year in the 1970s to about 15,600 tonnes in 2016.

The main sources of nitrogen emissions in Norway are the oil and gas industry, coastal shipping, fishing vessels and road traffic. In 2016, emissions were about 153,000 tonnes. In addition, there was a total emission of 28,000 tonnes of the nitrogen compound ammonia. Agriculture accounts for about 90 per cent of the emissions of ammonia.

Read more about the data Share graf Jpeg
Png
Pdf
SVG Download graf as Print
This graph is created with open data from miljøstatus
Create you own graph on http://miljostatus.no/finn-tallene

Acid rain does not respect national borders, and is a problem for most European countries. The answer has been to join forces to reduce overall European emissions of sulphur and nitrogen.

Most European countries have undertaken to reduce their emissions of acidifying substances through the Convention on Long-range Transboundary Air Pollution (LRTAP). Several binding protocols have been adopted under the convention, including the Gothenburg Protocol, which entered into force in 2005. Initially emissions ceilings were set for 2010, but the protocol was renegotiated in 2012 and new emissions ceilings (to be met in 2020) have been set.

In the revised Gothenburg Protocol, Norway has undertaken to reduce emissions of sulphur dioxide, ammonia and nitrogen, by respectively 10.8 and 23 per cent relative to emissions in 2005. For Norway, the new requirements represent only minor changes. For sulphur dioxide, the target was reached already in 2007. For nitrogen oxides the target was reached in 2013. Emissions of ammonia must be reduced from 28,000 tonnes in 2016 to 25,000 tonnes in 2020.

In 2013, the EU Commission presented a proposal for a revised directive on national emission obligations for sulphur dioxide, nitrogen oxides and ammonia, by 2030. The implementation of the directive will further reduce cross-border air pollution in Europe.

Liming of rivers and lakes is an important means of remedying the worst of the damage caused by acid rain. The aim is to give animals and plants a chance to re-establish themselves. Each year 25,000–45,000 tonnes are applied in Norwegian rivers and lakes. The liming programme is most extensive in Telemark, Aust-Agder, Vest-Agder and Rogaland counties.